A LITTLE ABOUT ME

Currently, I am working at Accenture in the Applied Intelligence Consulting practice. Making data accessible and easy to understand is part of my day to day job.

I have a double Master’s degree in Data Science (City, University of London) and International Financial Management (Queen Mary University).

LET’S GET IN TOUCH 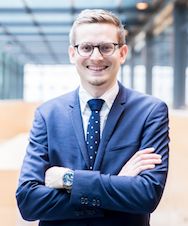 LATEST FROM THE BLOG

During October 2015 and January 2016 I worked as a working student in the consulting department in the area of financial services.

In August 2015 I started my two months internship at KPMG in the consulting department. I worked for an international banking institution. After my internship, I was offered a working student job and I accepted it.

In February 2015 I started a two months internship at KPMG Luxembourg in the audit department in the area of funds and corporate.

During August to September 2014, I worked at the Menuiserie Kreamer in Luxembourg in the corporate planning department.

During summer 2012 I had the chance to work for the ING Bank in Luxembourg in the private banking department.

During 2013 to 2016 I did my Bachelor’s degree at the Ludwig-Maximilians-University.
Bachelor Thesis: Market reactions to the SEC approval of a CEO pay ratio disclosure rule
Final degree: 2.36 (good)
Key subjects: Corporate Accounting and Finance
Subsidiary subject: Informatics

President of the Luxembourg Business Management and Economics Students Association (ANESEC.lu) since from 2016 to 2017. This student assocation has over 600 members. We organise a job fair (REE) and different workshops (Business Day), inform and represent students and have over 20 different sponsor firms.

Vice President and Treasurer of the Luxembourg Students in Munich Association (LSM.lu) 2014 – 2016 with over 150 Members.

Admitted to the young talents programme “HighQ” at KPMG Germany

You can view my LinkedIn profile. I am currently an Analyst at Accenture’s Applied Intelligence Consulting practice.